In the cold darkness of after-hours KEL Port, something isn’t right. Hooligans search for off-worlders to torment. A supervisor tries to hide the evidence of his misdeeds. And down at the loading docks, something strange and dark has found its way into the habitat.

A Shadow of a Presence follows Bradley Radco, a not-so-ordinary cargo handler,  and shows a less Baron Cargo-centric (and less human-centric) side of KEL Port. It is the third installment of the Shadow sub-series, following A Shadow Among Shadows and A Shadow of a Rumor.

In his dimly lit booth at the back of Mog’s cantina, Radco fidgeted in his seat. The obtrusive thoughts were back, and stranger than ever. He blinked. Black liquid pooled on a gangway floor, slowly expanding. Ripples marred its surface.

He blinked again and the tunnel-like gangway was gone. He was still seated in his booth in the cantina, hands gripping the table on either side of his empty meal tray. Glass shattered as two patrons at the bar started a noisily unproductive wrestling match. Shouts rose as their compatriots cheered them on.

He really should head back to his living unit. It was late, and the cantina crowd would only get rowdier and more dangerous as the night wore on. Yet something seemed to hold him fixed in his seat– something dark and dreadful and unfinished. It whispered to him with a voice like the scales of some great serpent sliding between the insulated walls of the flier port.

Between blinks he saw the dark liquid again; it had found the joints of the gangway. Seeping into the structure, it oozed toward the loading dock. As the dock and its adjoining warehouse were more elevated than the supply pod parking structure, the liquid had to flow uphill. Liquids weren’t supposed to do that in an environment under the affect of gravity.

Radco lifted his hands off the table, mildly surprised by the twin circles of dampness left by his palms. Over by the bar, the Mog and his bouncers were separating the combatants and ejecting everyone involved. The maddening whispering continued, just a few decibels too low to make out the words.

The whispers in the docks, fairways, and corridors of KEL Port were darker tonight. Up near general intake, where new arrivals to KEL26 were processed, Port Security officers were clustered in small groups muttering amongst themselves. In the cozy noodle shop on Sub-Level B, the little family of Tau-Ceti immigrants weren’t greeting customers with their usual cheer. And down in the Mog’s cantina, where most of KEL Port went to eat and drink, kindly, straightlaced Loadmaster Teller sat in corner, plastered out of his mind, having an angry argument with an empty chair.

Something was surely amiss, Radco thought, but puzzling out exactly what was proving to be a difficult task. Calamity was like a disease to humans; it might not have struck anywhere near them, but it deeply affected them nonetheless. To remain unaffected by the general air of unease would mark him as an outsider, unnatural and automatically suspect.

Radco shivered at the thought. Humans were notoriously cruel to outsiders.

END_OF_DOCUMENT_TOKEN_TO_BE_REPLACED

Wondering where the blog posts and Patreon content are at? Well, so am I.

All joking aside, though, I know exactly where they’re at. I have a couple of blog posts and a ton of writing planned out– I just need time to work it. The Other Job continues to eat an extremely excessive amount of time– 75 hours this week– and I’m running on empty.

END_OF_DOCUMENT_TOKEN_TO_BE_REPLACED

Congratulations! You survived another week.

Your joy at finally reaching the point where you can get a full night’s sleep is tempered by the realization that the weeks are going by faster and faster, and you’re not getting anywhere. You’re just getting a little more tired and a little farther behind each time. It’s like Tetris: your reward for completing each level is to do it over, but faster and more challenging.

You succeeded at becoming your department’s auditor! How would you like to also teach company-wide classes on a subject of great legal importance to the company’s continued operation? You’ll need to jump from thinking like an auditor to thinking like an instructor. You’re also going to need to write your own curriculum, because it turns out that we don’t really have one. And yes, we expect you to accomplish all that while continuing to perform your current duties.

Wow, you did a really good job on those classes! The training department is highly impressed. How’d you like to do all of the above while training a revolving group of new hires?

END_OF_DOCUMENT_TOKEN_TO_BE_REPLACED 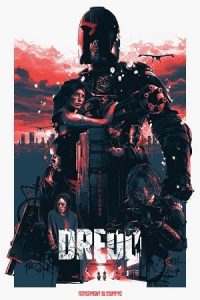 For the purpose of disambiguation, this review is of Dredd (2012), starring Karl Urban as Judge Dredd and Olivia Thirlby as trainee Judge Anderson.

When Dredd and Anderson respond to a grisly triple homicide in the high rise mega slum of Peach Trees, they have no idea that they’re walking into the heart of a ruthless criminal’s base of operations. Ex-prostitute Ma-Ma (played excellently by Lena Headey) is the kingpin of a cartel that has risen to supremacy through a brutal combination of extreme violence and drug trafficking. The drug in question is Slo-Mo, a substance which slows the user’s perception of reality to 1% normal speed.

I’ll admit I didn’t have high expectations for this film. I’m not a huge fan of Karl Urban, and I had suspicions that Judge Anderson would be, as happens all too often to female action leads, little more than eye candy. The prominent place of Slo-Mo in the trailers gave me flashbacks to the heavy-handed drug propaganda of the 80s and 90s.

I’m happy to report that I was wrong. Dredd surprised the hell out of me. It was really good.

END_OF_DOCUMENT_TOKEN_TO_BE_REPLACED 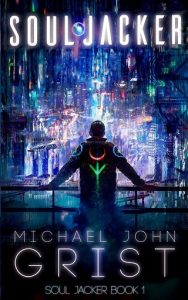 Michael John Grist’s Soul Jacker is easily one of the most unusual and thought-provoking cyberpunk novels out there. This book is up there with the classics of the genre in terms of style, narrative voice, and introduction of new concepts.

Grist has built a world that is strange and fascinating both inside and out: memories are injectable, mind bombs can disrupt and destroy thousands of minds without leaving a physical trace, and we’ve honed hacking the human mind down to a fine (if dangerous) art.

Ritry Goligh is one such hacker, or Soul Jacker, a former marine left adrift by the end of the war he was created for. He’s a hard individual who’s made a lot of sacrifices in order to survive, but he isn’t a bad guy. Despite picking up the pieces of a psyche shattered by trauma multiple times throughout his life, he never quite succumbs to the darkness. I found myself really liking that about him. He’s a hero, if nothing else than because he refused to become a monster like those that surrounded him. In an ugly world, refusing to give in to cruelty is an act of rebellion.

Grist gives the reader plenty of demons to hate, though, (or cheer for, if that’s your thing.) This is a narrative that pulls no punches, and gory is an understatement for much of the action. We plumb the depths of a world ravaged by fuel wars and rising sea levels, as well as the depths of Ritry’s oft-broken-and-rehealed mind– a labyrinthine maze of hidden memories and missing pieces, hidden behind steel walls of protective scar tissue and stalked by monsters. And then of course there are the traps laid by the enigmatic character known as Mr. Ruin.

Soul Jacker is a wilder ride than I ever expected when I picked it up, full of dizzying highs and sickening lows that I found oddly satisfying. This is a novel that will thrill you, horrify you, and make you think about where we’re going. I loved it, and I think you will too.

Sound interesting? Soul Jacker is available on Amazon in ebook and paperback. I highly recommend it!