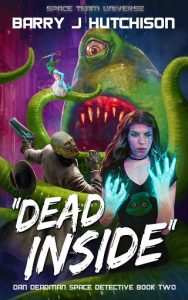 There was another sound, too. A sound that made something coil itself into a knot somewhere deep down in his gut. He knew the sound, but couldn’t quite place it – a chinkt, like metal hitting gravel. It came at him over and over, slow and steady and rhythmic.
Chinkt.
Chinkt.
Chinkt…

There was a hole in his chest roughly where his heart should be. He couldn’t recall that happening, either, and yet there was something familiar about it. Something that wormed its way into his brain and set alarm bells ringing.

He tried to think logically about this. He was tied up. He was buried. Those were both bad. But there was always a way out. He just had to think rationally about it, that was all.

One of the things I love about the character of Dan Deadman is that, as the previous book in this series proved, he’s nearly indestructible. He’s a tank. Whether it’s massive gunshot wounds, brutally destructive beatings, or twenty-story falls, Dan just keeps on ticking. (Sometimes with a little help from his friends, like Ollie, who helpfully stitches on new limbs when Dan’s get severely broken or flat out torn off.)

But if Dial D for Deadman proved that Dan can take a beating and keep going, Dead Inside (ironically) proves that he’s still very much human. This is noir detective scifi at its finest, and the author’s mastery of grim humor is the perfect counterpoint to the darkness of Deadman’s world.

“There’s a hand on the seat,” Ollie said.

“Yeah,” said Dan, taking the severed appendage from her and tossing it into the back. “Had to get through the fingerprint scanners. Seemed like the obvious solution.”

“Well of course it seemed like the obvious solution,” said Artur. “Because ye’re a frightening bastard, Deadman. A frightening big maniac, in fact. I thought ye had a friend or someone who was going to let ye in and out.”

“Then why not just…” Artur’s voice stuttered to a stop. “Oh. Right. And, again, that brings me right back to ye’re a fecking maniac.”

“Oh. Wouldn’t it have been easier just to bring the rest of him, too?”

I still can’t read this exchange without laughing. It’s so grim, so brutally efficient, and so drop-dead hilarious.

This addictive blend of scifi mystery, noir revenge narrative, and grim humor got me through an especially dark time, and in doing so it earned a special place in my heart. I’m in the middle of a second read-through, and it’s just as good the second time around. It might even be better than Dial D for Deadman. I highly recommend you pick up your own copy… especially if you are, like me, a little bit dead inside.

Dead Inside is available on Amazon in ebook, paperback, and audiobook– as is the first book in the series, Dial D for Deadman. (You can check out my review of Deadman here.) Many thanks to author Barry J. Hutchison for another excellent read, and for what may be some of the best book quotes I’ve included in this blog to date.