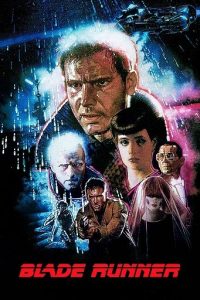 Blade Runner bears about as much resemblance to the book that inspired it as a box of chicken nuggets does to a live chicken, but in this case that’s probably a good thing. Do Androids Dream of Electric Sheep?  was a singularly strange story, puzzling on many levels. (If you’re interested, you can check out my review of Electric Sheep here.)

Harrison Ford plays Rick Deckard, a former Blade Runner (aka, police bounty hunter) who’s been forced back into service to hunt down a group of escaped Nexus 6 androids, now referred to as replicants.

The plot and world-building of Electric Sheep has been pared down significantly in some aspects and completely rewritten in others. No mention is made of the massive nuclear war that made most of Earth uninhabitable, although the off-world colonies remain. Replicants, produced to provide slave labor on the colonies, periodically escape and make their way back to Earth.

The 1982 film’s sense of style seems to have arrived at 2019 via 1950, and the lighting is a study in how to save money on set design by obscuring most of the scene in darkness. Gone is the industrial greyness of Electric Sheep, replaced by a glitziness that’s equal part 1950 and 1980. Mercerism and Philip K. Dick’s emphasis on empathy has vanished from the story, as have the titular electronic sheep. The animal markets and the existence of electronic knock-offs remain.

The number of escaped replicants, their relationship to each other, and their actions have all been completely rewritten. Now there are only four; leader Roy Batty, Pris Stratton, Leon, and Zhora. Roy’s wife, Irmgard Batty, no longer exists. Roy and Pris are in a relationship.

Built with an expiration date that gives them just four years to live, the replicants seek a way to stop the clock. Perhaps unsurprisingly, they don’t want to die. This particular group has arrived on Earth to extract answers from the Tyrell Corporation that created them.

Like the androids in Electric Sheep, I found Blade Runner’s replicants easy to sympathize with. Rutger Hauer and Daryl Hannah’s performances as Roy and Pris carried this film for me, and I particularly enjoyed Hauer’s “tears in rain” speech. Roy Batty may be a killer, but he’s also a desperate man trying to save himself and his companions from death. As such, Roy and Pris make far more compelling heroes than Deckard does. Even Ford’s screen presence can’t save Deckard from looking like a coldly calculating modern day slave hunter. He’s not particularly likeable from any angle.

Last but not least, no review of Blade Runner would be complete without addressing the theory that Rick Deckard was a replicant. There was no sign of this angle in Electric Sheep, and it’s hard to say what the point of it would be in Blade Runner. However, there is an eerie red-reflective pupil effect given to the artificial animals and occasionally to those humans identified as replicants. Maybe it’s a side-effect of the cameras in used during filming. Maybe it was deliberate, a subtle tell marking artificial beings. If anyone can see it, why aren’t the Blade Runners hunting replicants by checking eyes?

If the effect was deliberate, I think it’s pretty clear that Deckard was meant to be revealed as a replicant in the final scenes of the film. Whether the red pupil effect was deliberately added is entirely up to you. I’ve looked it up, and apparently the screenwriter, director, and actor couldn’t even agree on Deckard’s status.

As much as Deckard and his narrative arc left me cold, Roy and Pris made this film worth watching. If you haven’t, I’d recommend checking it out– if nothing else, just to see what all the hype is about. I’m not sure the hype is justified, but Blade Runner is widely considered to have sown the seeds for many more innovative works that followed.