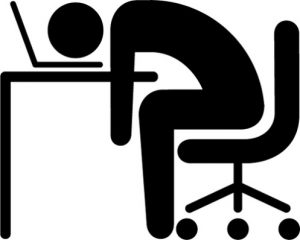 I joined the job force at fifteen. At one point early in my career as an airline employee/professional driver, I was working sixteen hours a day plus commute time. I worked midnight to seven at one job, then clocked in at eight and worked another eight to ten hours at the next. I slept through my single thirty minute lunch break. I learned that I couldn’t take the main arterial road through town back to the station at the end of the day, because it was broken every thousand feet or so by an intersection. I’d wake with a jolt at red lights when my truck started to inch forward, because as I passed out my foot started to let up on the brake.

I was like Jason Statham in Crank– if I slowed down, I’d die. Or to be more accurate, I’d fall asleep– about the same when you’re behind the wheel of a large vehicle. But dammit, it was worth it! That summer I made almost $5,000 a month.

“Is that healthy?” I asked my coworkers, laughing. “Is that normal? I don’t think that’s normal.”

In December in Interior Alaska, there aren’t that many hours of daylight. I started my shift three or four hours before the sun rose, and delivered two-thirds of my route in the darkness after sunset and blue twilight.

They say that cold and exhaustion can make you hallucinate; mushers in the Quest and Iditarod long distance races have reported seeing strange lights, shadowy shapes, phantom moose, and friends and family joining them in the wilderness. Late on those December nights, I saw lights in the darkness where there were none. Shadows with no source crawled at the edges of my vision, or bolted toward the road only to vanish when they reached my headlights.

One night I rolled up at junkyard buried under a thick coat of new snow. As I unloaded a stack of packages from the back of the truck, I caught a dark shape out of the corner of my eye and turned to find a large dog about ten feet behind me. It never made a sound as it followed me from my truck to the front door of the house.

When I asked the owner if his dog was friendly, he laughed. “I don’t have a dog, man. Whatchu talkin’ ‘bout?” When I turned to leave, the dog was gone.

Yet somehow, despite all that, I found time to write. It was my escape from the hell of reality, a little corner of life where I could control what people did and said, a place where the hero stood a chance.

You can laugh that it took me three years to write Necrotic City. I’m amazed that I managed to put 145,000 words on paper while working that job.

Eventually writing became not just an escape and a place to vent the things I couldn’t talk about, but a source of hope. I dreamed of a future where I could get enough sleep every night, wake up rested, and get paid to spend the day creating stories that others could relate to.

Writing gave me a reason to look forward to tomorrow; if I could get up early enough, I’d have a little time to write before work. It’s not an exaggeration to say that escaping into the creation of other realities kept me from killing myself on more than one occasion.

If you’re an aspiring author, don’t give up. The world needs your stories; but more than that, your creativity needs to be able to stretch its wings. You can do this! Yes, you: the woman working two jobs and pursuing a degree. The guy working three jobs to support his family. The moms working while raising kids. I believe in each and every one of you.