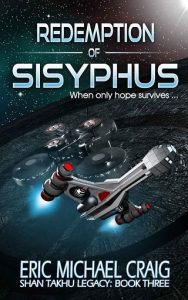 In the thrilling conclusion to Eric Michael Craig’s solar system-spanning Shan Takhu Legacy series, the fearless crew of the ice-harvesting research vessel Jakob Waltz, the remnants of the Human Union, and the rebels of Fleet Cartel battle an AI bent on saving the human race from itself by any means necessary.

The AI Odysseus proves to be a Pandora’s box of nasty tricks, and it possesses nothing that could even remotely be called a conscience. Powered by a “you have to break a few eggs to make an omelet” style of damage control –where the eggs are human lives– Odysseus works to extend its control to the edges of the solar system and eliminate anyone that could possibly be considered a threat to its power.

After all, it’s hard to protect humanity with all these pesky humans standing in its way.

Fortunately, in addition to the motley group of heroes and leaders we’ve come to know and love over the course of this series, there’s also a couple of pro-human AIs, a crew of upgraded humans, and a treasure-trove of mysterious alien technology on the heroes’ side.

Put all of these elements together, and the result is a grimly prophetic thrill ride peppered with seat-of-your-pants skirmishes and dark discoveries. Redemption of Sisyphus is a multi-fronted three-dimensional chess match against a malignant artificial intelligence able to infect almost any automated system, and capable of some deeply chilling meatspace tricks as well. The final installment of this series kept me on the edge of my seat from start to finish.

I don’t review more than the first book of a series very often, and that’s due to the fact that beyond book one it gets successively harder to write a decent review without revealing potential spoilers. Hopefully I’ve managed to walk that fine line between being too generic and revealing too much about the plot for new readers. Whether you love this review or hate it, let me know in the comments.

If it sounds like something you want to read, Redemption of Sisyphus is available in paperback, ebook, and Kindle Unlimited on Amazon. New to the series? Start with Legacy of Pandora, and check out my review here.