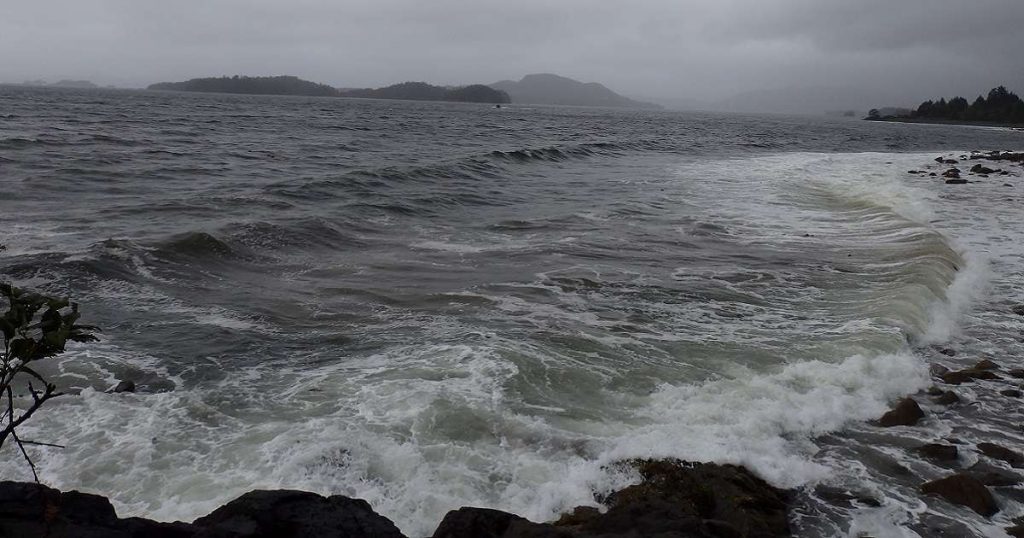 Steely grey swells rolled under leaden skies as Danny steered the skiff around the tip of Dog-Ear Point. He released the throttle and let the craft glide to a stop beside the faded plastic buoy that marked one of his family’s few remaining crab pots. Ava snagged the chain with her boat hook, and together she and Cam hoisted the pot into the skiff.

“We’ll reset it after the storm passes.” Danny chose not to comment on the fact that it was their tenth and final empty pot of the day. If they didn’t get lucky in the tide pools, none of them would be having dinner.

Farther around the point the chop was worse, as if the ocean was determined to dash them against the rocks before they could reach the narrow strip of pebble beach. Ava and Cam clung to the skiff’s bench, their tanned faces as grey as the ocean.

Pebbles and gravel ground under the skiff’s nose as Danny guided them to shore. The young pair grabbed their foraging nets and boat hooks and sprang out onto the beach, splitting up to cover more ground as they searched the rocky tide pools for stranded sea life and recyclables.

“Don’t take too long!” Danny yelled after them. “The tide’s coming in fast.” In a few short hours the little beach would be under water, the ocean expending its fury on the dark rocks above.

He dragged the skiff farther out of the water, then grabbed his own foraging net and ventured up the pebbly incline. A flash of bright blue caught his eye as he scrambled over a jumble of rocks; the object resolved itself into a sky blue parka. It was still attached to its owner, who lay face down in a large tide pool. Khaki pants and brand new hiking boots rounded out the stranger’s gear. If he’d gone into the water wearing a hat or gloves, they’d since parted company.

Danny stared down at his find, stomach churning. Should he go through the man’s pockets? Just walk away and pretend he’d found nothing? Cam and Ava were like his younger brother and sister, although at sixteen and seventeen they were just a few years younger than he was. He had a duty to protect them from the fallout of finding the outsider’s body.

“Wonder who put him in?” Cam asked, prodding the visitor’s waterlogged parka with his boat hook. The sound of the incoming storm pounding the beach had covered his approach. Ava trailed a few steps behind him.

“What’s it matter?” Danny retorted, a lump of cold dread settling into his stomach like a stone. “Troopers’ll pick a couple of us village kids to string up and call it solved.”

“What if we figure out who did it?”

“What if we find him,” Cam said, rolling the blue-lipped white man’s body over in the tide pool. He looked very dead. “What if we make him confess?”

Danny and Ava both stared at him as if he’d lost his mind. The surf roared against the pebble beach below, and an icy rain began to fall as if to drive home the point that they were in deep. And the tide was rising fast.

Between A Rock & A Storm  is the beginning of a murder mystery that I’m planning to post in serialized installments. It’s set in the same dystopian near future as Hel’s Fury, the preview of which you can read here. The full story is featured in the charity collection Trumpland: An Alternative History of the Future, along with dystopian, horror, and science fiction stories from a number of other talented authors.