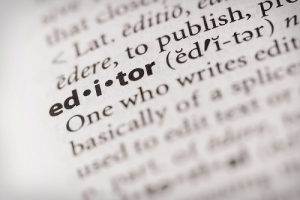 For a small subset of the writing population, this reaction does stem from a fear of being told they don’t measure up. Others don’t understand the value of a second, trained set of eyes in polishing their work for publication.

But many of us have seen statements from “professional” editors that have made us, well, wary.

An unedited, unpolished manuscript is where authors often feel most vulnerable. We know it has lurking typos and awkward sentences. We suspect there may be passages that make sense to us, but may not make sense to anyone else. We may not have even shown it to anyone else yet.

Perhaps the author in the screen shot above could have used to better prepare their story for editing. I also don’t discount Google’s role in some of the manuscript’s problems; I’ve seen some major formatting disasters from Google docs. But an editor airing their scorn for an unexperienced client in a public group is almost never appropriate, and definitely wasn’t in this case.

Think of it like this: if your doctor talked about your body and your medical history to their friends the way this editor talks about their client, would you still want to see that doctor? What if it was your therapist? Or your dentist?

Although there generally isn’t a strict non-defamation/non-disclosure agreement between an editor and an author, it’s reasonable for authors to expect that they and their work will be treated with courtesy, respect, and professionalism. If you’re an editor, for the love of all that is good don’t do this!

Editors and other publishing professionals who show this level of disdain for their client base are doing no one any favors. They besmirch the reputation of everyone in their industry, and cause even the most confident author to wonder what their editor really thinks of their work.

The good news is that editors with these kinds of opinions are a small minority. I’ve been lucky enough to work with a number of talented, considerate editors, and I’ve met tons more. The vast majority of these people will respect you and respect your work as long as you extend the same courtesy to them.

In next week’s post, I’ll outline some helpful tips for finding a good editor and making the most of their services. Stay tuned!