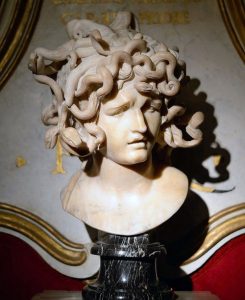 I’ve always liked Medusa. Like a lot of the more interesting components of Greek and Roman mythology, she’s a remnant of an earlier civilization that the Hellenic peoples (those who would later become what we think of as the Greeks) overran. Demonized by the invaders as a fearfully ugly monster who could turn men to stone, it’s likely that Medusa started out as the goddess of another people, perhaps hidden behind a Gorgon mask intended to discourage the profane from trespassing on her mysteries.

The problem with the myth of the Gorgon Medusa is that her history was written by her murderers.

Perseus represented the Hellenes who invaded Greece and Asia Minor early in the second millennium BC and challenged the power of the local goddesses. His name is possibly derived from the Greek verb perthein, “to waste, ravage, sack, or destroy,” which appears in Homeric epithets. According to Carl Darling Buck in Comparative Grammar of Greek and Latin, the –eus suffix is typically used to form an agent noun, in this case from the aorist stem, pers-. Perseus, therefore, is not a hero but a sacker of cities.

Perseus’ beheading of the goddess symbolizes the conquest of one religion by another. The Hellenes overran the goddess’s shrines, stripped her priestesses of their Gorgon masks, and stole her sacred horses. (An early representation of the goddess with a Gorgon’s head and a mare’s body has been found in Boeotia, on the shore of the Gulf of Corinth, in what is now part of modern Greece.)

The Greeks’ and Romans’ hatred of their rivals (and women in general) is readily apparent in their portrayal of the deities they usurped.

In a late version of the Medusa myth, related by the Roman poet Ovid (Metamorphoses 4.770,) Medusa was a ravishingly beautiful maiden, “the jealous aspiration of many suitors.” After Poseidon assaulted her in Athena’s temple, the enraged Athena transformed Medusa’s hair into serpents and made her face so terrible to behold that the sight of it would turn onlookers to stone. In Ovid’s telling, Perseus describes Medusa’s punishment as “just and well earned.”

<sarcasm> How incredibly heroic of him. </sarcasm>

I can’t help being more fascinated by Medusa than by the culture that killed her. How powerful must her people have been that she left such an indelible imprint in the psyche of the society that wiped them out? Beneath the horror stories of the uncomprehending Hellenes, what was she to her own people?

Here’s to remembering Medusa as the goddess she once was, rather than the monster her murderers made her out to be.