Friday evening found me crowded into a shed with a motley group of individuals. The shed was attached to the back of a slant-roofed little house tucked into a steep hillside a few miles north of Fairbanks, Alaska. The crowd included everything from grey-haired retirees to stay-at-home moms to workers in grimy Carhartts, and even a few professional transporters like myself. Chatter wandered between the heavy snow load, predictions of when the first willow blooms would be out, and speculation about whether the coming summer would be as poor for pollen collection as the last one was.

At the back of the shed, an elderly gentleman with wild white hair handed out buzzing cages; each sturdy 4 inch by 16 inch by 12 inch enclosure contained a queen and roughly 5,000 of her subjects, totaling 4 lbs of bees. (Bees are sold by weight rather than number for reasons of expediency.) This particular bee dealer is the only one in Fairbanks, supplying hundreds of backyard beekeepers in the area.

I’ve been transporting bees for over a decade now, but rumor has it this will be the bee dealer’s last year. That may mean the end of my yearly bee run, or it may mean a much lengthier run down to Delta Junction or Anchorage to meet another dealer. For now, I collect 8 lbs of bees, wrap their cages in my jacket, and climb up a crude staircase to the dealer’s parking area. Now comes the fun part.

END_OF_DOCUMENT_TOKEN_TO_BE_REPLACED

Today on the author blog, I’m going to do something different. What follows is the first page of a short story that will be released as part of an anthology this summer. Hel’s Fury is set in Fairbanks, Alaska, in a dystopian near future. And yes, the spelling is deliberate.

A Taste of Things to Come: Hel’s Fury

As Fairbanks Police Captain Nathan Spencer waded through the soggy snow toward the crime scene, a growing sense of dread supplanted his annoyance at being called out first thing on a Monday morning. Dozens of other pairs of boots had already made the same journey, clearing a wide path from the parking area to the underside of the nearby Steese Highway bridge.

To his right the Chatanika River rushed by, muddied by year-round mining operations upstream. A forest of scraggly black spruce marched off into the pre-dawn dimness on the far bank. To his left, a handful of Alaska State Trooper SUVs and several Fairbanks Police cars sat in the parking lot of an abandoned campground. Ravens circled overhead.

A FPD detective named Henriksen met him at the edge of the highway overpass, expression grim.

“This had better be good,” Spencer snapped. “I’m going to be pissed if you called me all the way out here just because someone strung up a couple more drunks.”

The detective grimaced. “These weren’t drunks. That’s why I called you. These are some of ours.”

END_OF_DOCUMENT_TOKEN_TO_BE_REPLACED 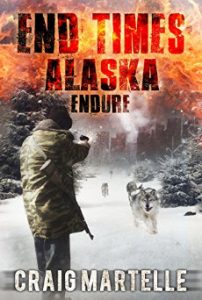