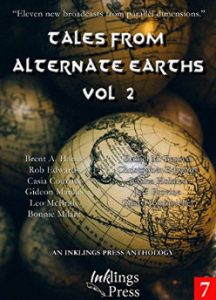 The haunting and all-too-believable tale of the first woman cosmonaut to reach space. A Handmaid’s Tale-esque account of a present day where witch trials never went out of style. An alternate past where Hitler was diverted from the course that eventually saw him rise to power and orchestrate the largest genocide in recorded history. An alternate history where an Andalusian polymath invented the glider and gave birth to a future utterly unlike that which we know today.

These stories and many more lie between the pages of Tales from Alternate Earths 2, and like a good potato chip (but much more mentally stimulating,) it’s hard to stop after just one. While it’s hard to pick favorites from so many excellent stories, Lueger’s Wager and The Goose’s Wing were the two that stood out most to me.

So many works of alternate history and time travel scifi have speculated about killing Hitler before he had a chance to set Germany on the path that led to the Holocaust that it’s practically a trope of those genres.

In Lueger’s Wager, Bonnie Milani poses a different question: what if there was another way to divert Hitler from the path that led to WWII and the death of millions? Unexpected, based on historical fact, and wholly well-done, this short story gets an extra round of applause from me.

Likewise, Daniel M. Bensen’s The Goose’s Wing incorporates so much historical research and cultural nuance that it’s an immediate stand-out. The story itself is well-written and compelling, the tale of a courageous video journalist/glider pilot championing unification and mutual understanding in a region wracked by the same tribal factiousness that plagues the Middle East in our timeline. The Kiteworld map and its key at the end of the story are also a must-read.

It is a rare anthology that I enjoy through and through. There are no weak stories between its pages, no duds hidden near the back cover. Inklings Press presents a wide range of works to make you think, to inspire you, to remind you not to take for granted where we are– while keeping in mind how far we have yet to go. With something for everyone and a lot to love, this anthology is an instant classic. I look forward to more from this publisher and these authors in the future!

Tales from Alternative Earths 2 is available from Amazon in ebook and paperback formats.